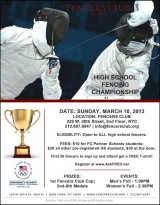 The Fencers Club 2nd Annual High School Championships were a great success, with more than 50 scholar-athletes competing in both Men’s and Women’s Individual Foil. Below are listed the Top 8 results and their schools, while full results can be found HERE.