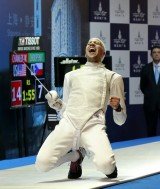 Tonight’s Shanghai Grand Prix semi-finals and finals of the men’s foil event took place at the Westgate Mall, the second night with an elegant setting for a major world fencing event. With direct eliminations beginning this morning in the round of 64 at the nearby Jing ‘An sports/tennis center, an extremely strong group of top-level foilists from around the globe spent a very energetic and passionate day fighting for medals. In the end, four fencers made the top four to compete in the Westgate atrium: Alexander Choupenitch from Czech Republic, France’s Erwan Le Pechoux, Russia’s Dmitry Zherebchenko, and American Miles Chamley-Watson.

Both semi-finals were fenced enthusiastically, with Le Pechoux working to reclaim his former title on this same finals piste but missing the mark to Choupenitch 15-9. The Czech methodically fended-of Le Pechoux’s athletic attacks and deep lunges, keeping the game simple and technical to win his way into the finals. Chamley-Watson took an early lead on Zherebchenko, whose Italian-Russian mixed style helped him to rally ahead to nearly win the bout, at one time bringing the score to 13-11. Chamley-Watson overcame the lead, however, to win the bout and make the finals against Choupenitch.

Chamley-Watson was clearly on his game, as in the gold-medal round he clearly dominated Choupenitch throughout the bout. Despite a minor comeback, the American’s tremendous lunges, hallmark point-in-line stance, and excellent retreating defense proved too much for the Czech, and Chamley-Watson won the day with a final score of 15-7.

With multiple world championship and Olympic medalists and competitors in the ranks today, it was a tough day of fencing for everyone. Chamley-Watson proved his 2013 world-champion abilities were still sharp and focused. When asked what his secret for winning the day was, he said “my motivation for winning today was that my coach had knee surgery, I was up there on my own, and that’s what drove me. I couldn’t have done it without him, and this is to Simon.”