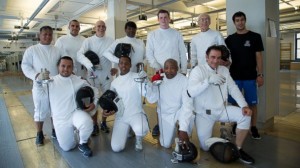 On Guard: How Sword-Fighting Is Bringing Veterans Together

Armed with épées in hand, a group of veterans at the Fencers Club in Manhattan is learning the sport of fencing. The Veterans On Guard Program provides support and opportunities for military veterans through fencing for free.

When Liz Cross thought of a way to support veterans, she said she knew that fencing would be a great sport that would suit them.

“Fencing is a combat sport that requires a lot of strategy, focus, determination and military veterans already have those qualities,” said Cross, executive director at the Fencers Club.

There is a strong honor code in fencing just like in the military, Cross said. “It is a natural extension, what we do here with veterans.” Fencing is a physically challenging sport. It encourages mental agility and teaches focus and self-discipline, fencers say. Many of the veterans in the program said they also enjoy the camaraderie and support they get from one another.

For U.S. Air Force veteran Alberto Cruz, fencing was something he always wanted to try and enjoyed as a fan. “When I came in to the club I was sold. When you go out into the civilian world, one thing that plagues us is confusion with what we need to do when we come out of the military, and fencing helps you focus,” Cruz said. “Discipline is something we’re accustomed to and, through that, we’re able to cope a lot better.”

The first time that former U.S. Army Sergeant Debora Abrams-Wright practiced, she said it was intense. “It was very different than what I expected. It was difficult at first but instinct is kicking in,” said Abrams-Wright, who noted she was always intrigued by the sport.

Abrams-Wright works at the Veterans Administration and she said she understand the importance of programs like this. “It is incredible and very much needed to have a program like this. Working at the Veterans Administration I get to see the inner trappings of what happens with veterans. You have veterans on fixed income, homeless veterans and with disabilities and they need to be able to have something to engage in and get involved. ” she said.

The group consists of a group of 20 veterans and active-duty members of all ages, branches and wars. “Having other veterans from other wars, WWII, Vietnam and Gulf War, we all talk about our experiences and I learned so much from them. It is a good way to let out frustration and at the same time help each other, and it is a great thing,” Cruz said.

Like many of the other veterans, Cruz found out about the program through the VA NY Harbor Healtcare System. Veterans On Guard started last fall and they practice twice a week. They focus on the épée style of fencing, and a typical session consists of conditioning, footwork and techniques such as lunges and jumps and finally arm work with one another.

The goal of the program is to engage disabled and able-bodied service members to integrate into the broader community through fencing, mentoring, sharing knowledge and experiences, Cross said. “To have a military veterans program at the Fencers Club from all different branches is an amazing thing and the best thing is that they can be part of our fencing community,” Cross said. “To be together here as a group is powerful for them and being part of the Fencers Club community means a lot to them.”

When Gervacio Maldonado first heard about the program he was interested in participating, he said.

“The program is absolutely amazing. What I really enjoy is the physical outlet that it gives us, and the teamwork and camaraderie that comes with the sport,” said the U.S. Air Force sergeant who is assigned to the 313th Recruiting Squadron. He has been practicing for almost two months.

“What I enjoy is that fencing is a combative sport and it is a thinking man’s sport. You have to think before you act and it is a good conversation between yourself and your opponent—I really enjoy that aspect of it,” Maldonado said.

For U.S. Army Vietnam veteran Peter Katopes, it is important that veterans are getting the attention they need.

“The Fencers Club has been amazing. I happen to be a veteran that came home during a time when the country was not very sympathetic or kind to veterans and I’m glad to see that we have programs like this that are very important, to be sure we provide social programs to re-introduce [veterans] to civilian society,” he said.

The Fencers Club recently hosted a tournament on June 8 in which veterans and elite athletes squared off against each other in teams of three, including a World Championship team member and veterans who served in WWII through Iraq and Afghanistan.

“Our goal is that through fencing we can empower them to give back and work with our community. It may be that they’re going to the Olympics, Paralympics, or teach in school and give them an opportunity and have fun at the same time,” Cross said.

For Cruz, being able to participate in this program has been both a rewarding and motivational experience, he said. “I want to continue doing this seriously. I’ve always been fascinated about fencing but I wasn’t sure if this was something I wanted to pursue, and after being here I want to do this for the long haul,” Cruz said.

Click the shield for more information about this unique program.