FC and Fencers Featured in the Epoch Times

Full article and photos can be found HERE. 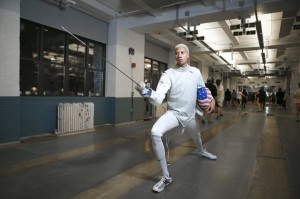 NEW YORK—Walking down West 28th Street, one would hardly notice the old 1917 Caxton building. With a small lobby and slow elevators, it is just another small office tower tucked away in Chelsea, one may think. Yet every afternoon, taxis and SUVs pull up and drop off children who carry inscrutable long cases.

The children are part of a club, but it’s more than that. It’s a community. It’s a place where the sweat of determination wins students educational opportunities—possibly a spot on the Olympic team—but most importantly personal transformation. It’s a fencers club.

Continuing the tradition of 18th century European masters, the Fencers Club of New York has trained the arts of parries, lunges, feints, and counter-attacks for over 130 years.

Despite the three silver medals its members brought home from the 2008 Beijing Olympics, there is no signage on their doors suggesting it’s an athletic powerhouse.

Yet it certainly is, as last year its star pupil Miles Chamley-Watson became the first American man to win gold at a world fencing championship. He is the 2013 Individual Foil World Champion.

Chamley-Watson, who turns 25 in December and still trains regularly at the club, likes the intensity and intimacy of the sport. “It’s just you and the opponent,” he said.

One of the oldest Olympic disciplines, fencing is sometimes dubbed “physical chess.” Athletically intense, yet precise and subtle, it favors the bold and daring, yet wits can beat those with muscles.

“Fencing is for smart people,” said one of Chamley-Watson’s coaches Irene Gershon. “You have to make decisions very fast.”

But guile alone only takes one so far, as another crucial attribute is mental resiliency. Even a technically stronger player can be defeated by one with a tougher psyche, Gershon said. There’s nowhere to run on the narrow strip where fencers are only allowed to move forward and back. The game lasts either three or nine minutes. The first one to land 15 hits to the opponent’s body wins.

So-Chung Shinn Lee is a devoted fan of the club. Her daughter Annora Lee, 12, has fenced for four years, and Lee saw her transform from a timid girl to a “very confident young woman.”

“Something happened with the fencing,” Lee said. Even though Annora can boast a line of tournament successes, Lee is most proud of her character change. “It teaches you so many ways to develop into a good person,” she said.

Fencing develops a myriad of useful traits. “For children, it helps them to make decisions by themselves,” Gershon said. It also develops focus. “Many children cannot focus and concentrate and they don’t realize it until they get here,” she said.

And despite its elegant, almost airy appearance, fencing requires superb stamina. “It looks like people say, ‘Oh, it’s a sissy sport,’” Gershon said. “It just looks easy. It’s not. You sweat a lot.”

Last, but not the least, “you have to learn how to lose,” Gershon said.

There’s another edge to fencing, one that can be called an open secret–known, but not emphasized. The sport can be a sure way into the best colleges. That is, if the fencer is good enough to be sought for the college team.

Just recently Gershon met with coaches from Harvard, New York University, Princeton, and Columbia. Of course, there’s more to it than just fencing well. “Are they hard-working? Are they team players? It’s very important to coaches,” Gershon said.

But ultimately, if a coach decides to get a fencer on the university team, nine out of ten times the student will get in to the school, Gershon said.

Lee stressed that she supports Annora’s passion, but not because it can get her into a good school. “All the college and Olympics–all that–that’s really just on the side and amazing if it happens,” she said. “But that’s not why we’re doing this.”

The elegant postures of skilled fencers exude an air of class. After all, the sport developed among British nobility. Yet the club’s executive director Liz Cross wants it to break into the mainstream. “We can certainly shed that elitism,” she said. “There’s no reason why it can’t be more like basketball.”

The initial spark for such an approach was out of necessity. Some years ago the club had to change locations and its rent multiplied.

A logical step was to increase membership, and so a school partnership program was established, Gershon said. Fencers Club coaches would go to schools and introduce fencing as an after-school program or even part of physical education.

It proved successful. Since Cross took over in 2009, the membership increased from 200 to over 500. The club now partners with about 30 schools and after-school programs serving some 1,400 children. Seventy percent of them are minorities, “students who would not have an opportunity to fence,” Cross said.

Fencing equipment costs anywhere between $400 for beginners to $1,200 for competition gear. Membership in the club is close to $1,000 a year, and sometimes there is traveling for competitions.

The club offers equipment rentals and scholarships. Club volunteers run a fencing equipment shop, and proceeds from it, together with donations, keep the club running. Even the full-price membership covers only about half the associated costs for running the club. “Anyone, in a way, is being subsidized,” Cross said.

The outreach is part of the club’s mission now, and it also does wonders for finding new talent. In fact, the world champion Chamley-Watson only tried fencing for fun because the club offered it as an after-school program in the Dwight School he attended. “It was fun to try and then before I knew it I was at a competition,” he said.

With the San Francisco World Cup less than a month away, Chamley-Watson is now among the top candidates for a podium appearance.