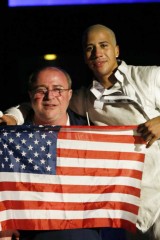 Congratulations to our community members who will be inducted into the USA Fencing Hall of Fame in 2015: Coach Simon Gershon and Robert Cottingham (PWF/FC). From the USA Fencing announcement:

Robert Cottingham (Orange, N.J.) won six U.S. National Championship titles in saber between 1986 and 1992. A silver medalist in the team event at the 1987 Pan American Games, Cottingham also had an outstanding collegiate career where his record was 108-11 while fencing for Columbia and won both individual and team NCAA titles in 1988.

See the full text of the USA Fencing announcement HERE.